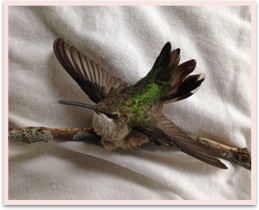 I heard fluttering and flopping sounds on the sun porch of my friend’s lake cottage. “It’s the hummingbird,” she said as she gently picked it up from the floor and cradled it in her palm. The bird quieted to lie still against the warmth, minuscule claws gripping her skin’s surface.

The tiny female had flown into the house in the late afternoon of the previous day through the propped door, as my friend unloaded her groceries. With the chill in the air promising a very cold nightfall, my friend made a small feeding station for it indoors from a red-draped eye dropper, then placed the bird on a cotton cloth and covered it with a cardboard box for comfort and security overnight. It was mid-September, and its companions had already begun their long journey south. Though weakened, it made small, intermittent efforts to batter against the solid wall of the room in the opposite direction of the window. Struggling to stay upright, it tilted and tumbled, even though it tightly clasped the small branch laid over the cloth.

What to do? How were we to understand this miraculous moment of intimacy as we held and tended this tiny Perfection? We sat quietly with it in meditation and asked the bird to come into our hearts to tell us what its iridescent wings and sharp, dark eyes had come to say.

The message came loud and clear: “Find the sweetness, the nectar, of every moment, no matter how it may appear to you. That is the essence of your healing.” The message also told us to take it outside to die, as it was clearly failing quickly.

We brought it to the garden wall next to the sturdy zinnias and laid it in the sun. When we checked on it an hour later, it was dead. My friend brought it inside, and we looked at it in amazement: still holding tightly to its branch on the white cotton cloth, the small body had fully extended its wings and tail feathers as if in flight, and its incredibly tiny tongue was protruding from its beak, tasting Death in all its sweetness!

There is a Tibetan Buddhist practice of Chöd in which the practitioner visits charnel grounds or burial sites to befriend Death and to face one’s fear of the inevitable loss of the physical body. In this imaginal practice, one is transported in the mind to merge with the Chöd deity Machig Lapdron, and from her vantage point to look down with great compassion at one’s physical form suspended below, while simultaneously chopping it into pieces to make a feast for the hungry ghosts who wander the Earth. The feast is offered unconditionally: as the imaginal practice continues, one’s body parts are placed into one’s ever-expanding skull cap to become a great stew that transforms into the nectar of whatever each of the hungry ghosts may need most. After all the ghosts are sated, the Chöd practitioner returns to his physical body awaiting him in ordinary reality.

This seemingly gruesome process is considered an act of great spiritual service. Not only is nothing held back from being offered in the feast, but also the gruesomeness itself transforms into exactly the nectar needed to heal each hungry ghost and allow it to move on into the Light. Just as Hummingbird told us, everything has a seed of sweetness, a seed of transformation, within it; nothing is too good or too precious or too awful to be held back from the offering. Like the hungry ghosts, each of us can partake of the nectar of Life and Death to nourish our souls.

We struggle so much in our human condition, trying to separate out the bad from the good. Yet we all know of the alchemy that hardship can provide to our spirit that takes the base metal of our pain and grief and greed and anger, and changes it to the gold of being purely who we are — or as Zorba the Greek puts it, “the full catastrophe” of being human — and reminds us that underneath surface appearances, All is Well. Hummingbird flew into our lives this day to teach us that miracle, to help us be with Death and our fears in a gentle way.

Afterward, we walked to the water’s edge. There, with the early fall wind sharp and crisp on our faces, we sang Hummingbird’s death song in gratitude, carrying its blessing to all hungry souls in need.