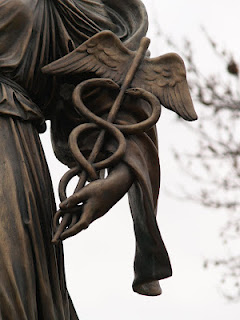 The winged caduceus of the Greek god Hermes came to supercede the staff of the healer Aesculapius (with its single snake around a wingless staff) as a representation of the North American medical profession less than a century ago, appearing initially as a symbol of the American Medical Corps during World War I.[1] Hermes (and thus his staff) was a symbol of wisdom, eloquence, and communication – vital elements in the physician-patient relationship. There has been some criticism of the caduceus as a medical symbol, however, because the mythological Hermes also leads the dead to the underworld, is associated with wealth and commerce, and happens to be the patron of thieves.

But a deeper look at the symbology is in order. In nearly every culture throughout history, staffs and serpents have had a general association with wisdom, healing, and transcendence, “whereby the underworld snake-consciousness passes through the medium of earthly reality to attain transcendence in its winged flight.”[2] The symbol historically has been reserved for powerful mythic figures, humans of unusual distinction (like shamans and mystics), or for royalty.[3]

It seems to me the practice of medicine in the contemporary West is well represented by the caduceus in many of its symbolic meanings. As medicine has become big business, the medical-industrial complex is ripe for thievery; enhanced communication technology and the electronic medical record challenge the privacy of patient records; and in the time pressure of organized medicine, doctor-patient communication suffers. The modern medical mandate to ‘find it and fix it’ leaves out the possibility for true healing through the transcendence of illness when medical providers equate the soul’s response to illness as tampering with religion and therefore beyond their role. Symbolically, the focus in modern healthcare is the staff and not the serpent or the wings.

Healthcare providers in all the disciplines, as well as the patients they care for, have felt the lack of soul in Western medicine. Over the past several decades there has been momentum to return the elan vital to our work as clinicians, first as ‘holistic medicine’ of the 1970’s, ‘complementary and alternative medicine’ of the 1980’s and 90’s, and more recently as ‘integrated medicine’ in the 21st century.

Into this confluence of Western and alternative therapies, the spiritual methodology of shamanism has begun to emerge as a source of healing. Traditionally the purview of native peoples for over 30,000 years, a cross-cultural form of it more applicable to western culture was developed several decades ago by anthropologist Michael Harner who with his faculty has trained thousands of conventional medical practitioners. Shamanism seems particularly relevant to the practice of western medicine today: inherently animistic, it directly addresses the soul aspect of physical and emotional illness. Today’s symbol of the caduceus, with stiff wings and coiled snakes arrested in their movement, is becoming invigorated!

The traditional practice of shamanism over the millennia is a community event in which the patient is remembered into the larger framework of relationship to family and group life as well as to the family of spirit. Illness is seen as a need to rebalance and attend to the soul’s work in this lifetime, and the process of recovery takes on a different and more profound meaning beyond only the release of distressing physical or emotional symptoms. Shamanism’s inherent work with the spirits can often provide answers to the existential questions of illness such as “Why is this happening to me?” (when illness seems unfair) “Who am I?” (when illness takes away our roles) “Am I more than my physical body?” (when we can no longer equate self with corpus) and ultimately, “How do I learn to fully and bravely face my own death?”

In January 2003 I conducted a survey of Western medical practitioners (physicians, nurses, psychologists, social workers, pharmacists, etc.) who also had shamanic training, to collectively understand how shamanic resources were being translated into more biotechnical healthcare settings. In addition to questions about allopathic training and shamanic training, the survey asked if and how the practitioner was able to integrate shamanism into the work setting, and if not able to integrate, what the challenges were.

I was surprised to find that many of the respondents, especially those in primary care settings, reported they did not use their shamanic training at all. They cited a number of
reasons for this, in particular, medico-legal and ethical concerns and the lack of a sense of how the form in which shamanism had been taught to them could apply to the clinical encounter.

Through conversations and collaboration between Michael Harner’s Foundation for Shamanic Studies and the owner and publisher of Alternatives Therapies in Health and Medicine, a small group of physicians convened a medical conference on shamanism in medicine in 2002 to provide a forum for medical practitioners to exchange ideas and creative forms for applying a shamanic framework into the healing equation. At the 3-day conference in a natural setting, surrounded by the spirits of nature, participants grappled with issues such as ethics, professionalism, lack of research, and disparate frameworks of medicine and healing. Together they remembered the larger Order of Things in which health and falling ill reside, and used ritual, ceremony, presentations, and informal conversations to connect with each other and with the spirits. These conferences continued for three years, through 2004.

From this series, the Society for Shamanic Practitioners was conceived and implemented in 2003-2004 to recognize and support the integration and practice of shamanism not only in medicine, but also in its re-emergence in other aspects of modern life: education, ecology, business, the creative arts. Its mission statement included (1) the creation of an alliance of diverse shamanic practitioners to function as a circle of peers; (2) gathering and disseminating knowledge about shamanic practice; (3) promoting personal responsibility in doing the inner work necessary to live and practice with integrity; (4) focusing resources and shamanic energies to bring healing and unity to the world; (5) encouraging a dynamic exchange around how people use shamanism as spiritual practice in their personal daily lives and how to bring shamanic practices into their professions; (6) supporting education through an annual conference, regional gatherings, and a journal of shamanic practice; (7) maintaining a repository of stories and clinical case studies of successful shamanic interventions; and (8) facilitating research evaluating the outcome of shamanic healing.

Several years ago, the Society sent out a call to its members for essays on how shamanically-trained western medical providers were integrating shamanism in their practice of allopathic medicine. The collection of these essays developed into a book released in January 2013, entitled Spirited Medicine: Shamanism in Contemporary Health Care.[4]

The book is a treasure trove of inspiration, practical wisdom, methodology, and research. It illustrates the integration of shamanic practice into urban and suburban medical clinics, hospitals, and private practices by a broad representation of medical disciplines (physicians, osteopaths, naturopaths, psychologists) and specialties (obstetrics, physiatry, family medicine, urology, psychiatry, cardiac rehabilitation, hospice) as well as the application of traditional indigenous shamanisms into these settings (African, Peruvian, Celtic). And it brings to life the process of returning soul to medical care as it lays out such diverse topics as surgery as sacred ceremony, psychopomp (escorting the souls of the dead to the Light) in hospice care, shamanic parallels to psychotherapy, expanding the clinical framework in which to understand the delivery of healthcare, and the structure of healing stories.

Another function of the book is to connect: of the thousands of medical providers now trained in shamanic methods, many operate in relative isolation. The book is designed to open doors for medical providers to find colleagues and maps and ideas that can extend the mundane practice of health care into a sacred pursuit.

There is a growing awareness of shamanism in this country. An increasing number of people have their own shaman as part of their healthcare team, at least three journals are devoted to the practice of shamanism, and a conference of shamanism in medicine co-sponsored by the Society and by Omega Institute in Rhinebeck, NY, occurred October, 2013. “The spirits are guiding us, transforming and adapting shamanism to a variety of cultures and healers and contexts. We know there are many roads up the proverbial spiritual mountain; shamanism is but one, though its methodologies and sacred underpinnings provide a means of spiritual engagement that is extremely accessible.”[5]

I have been struck by the power of this particular spiritual methodology to dig down to the essence of the healing required for a given person at a given time. We are moving beyond the secular and sacred split created by Descartes in the 1600’s, recognizing that whether seen or unseen, acknowledged or unacknowledged, soul issues are a major part of both illness and health, and the spirits can be accessed as a resource for these deep questions. We can build on the momentum for integration of mind and body and spirit of these past several decades, allow the wings of the caduceus to stretch and reach beyond the secular, the pinion feathers to spread, and the serpents’ scales to grip the staff in our ascent.