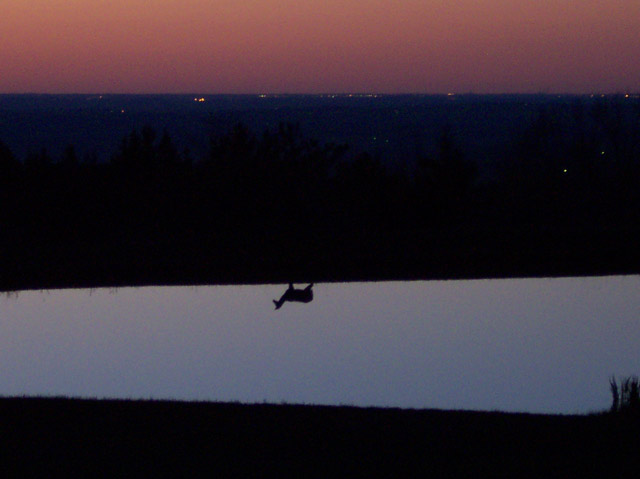 I have just finished a book, The Spell of the Sensuous, by David Abram. Abram is one of those writers whose long arms reach across the span of time to create a framework for helping you understand something that has been unsettled in your bones for a long time. I have always had a deep love of nature, yet there has always seemed to be a great chasm that kept me separate and chatting in my head as I walked through canyons, creeks, or soft swamps.

Abram’s is a book on language that begins before there were alphabets and ways of writing down ideas and experiences. He starts with primal language, the language of relationship to plants, animals, wind, fog, the sun. He says nature and all the elements speak to us in the “living experience of language – when we do not pretend to stand outside it, but rather accept our inherence within it, as speaking animals.” As children, we learn our first language bodily, not mentally, by making sounds: crying, squealing, laughing, mimicking the surrounding soundscape. Nature, including humans, all speak, “just as a human may suddenly understand the subtle gestures of a deer, or the gutteral speech of a raven, so the other entities hear, and may understand, our own talking.” He explains that indigenous peoples, both ancient and contemporary, don’t see a separation in human communication from the speech of any other natural form. The exchange can be auditory, gestural, palpable, spatial — connecting all things through the physical senses. “Language is a life, is our life and the life of the things. It’s no more true that we speak than that the things, and the animate world itself, speak within us.”

Now enters the alphabet. Originally begun as pictographs etched in tablets in China and the Middle East around 3000 B.C.E., it became fully developed and disseminated in Plato and Socrates’ time in ancient Greece. It created, for the first time, “the capacity to view and even to dialogue with one’s own words after writing them down.” I read on with amazement. Words beginning to have a life of their own! I could feel a chasm growing. The alphabet, and the written word, gave humans a new sense of autonomy from others, and even from the sensuous surroundings of nature that had held primacy in the ongoing conversation of life. Words also created auditory speech in our heads, which provoked even more distance from the direct experience of nature as we talk to ourselves (and others) about what we are seeing and feeling and experiencing.

As I moved through this book, I felt great sadness for the years of disappearance of my primary language. Reading, writing, and human speech have been vital to me, and yet I’ve been existing in a world separate from the living, breathing conversation of life. Now that I am living at High Pond, hopefully I have a chance to find the conversation again. I now know what I am hungry for in my bones. The pileated woodpeckers drum each morning to start the day with a kind of rhythmic dance. The bullfrogs down by the pond invite me to sing back. The spruce trees sigh and swing with the wind. At night, the great horned owls hoot between the trees, calling me out onto the dark porch to listen. And there I see the fireflies, their tiny lights brightly calling “Come on! Come on! We’re all here!” And I step off the porch.

This book is a good “read,” especially in the seasons of the outdoors. Read it, and then go take yourself outside.